SARSFIELDS will play Slaughtneil in the AIB All-Ireland senior camogie final after Niamh McGrath slotted an injury-time point for the westerners to give them a 0-8 to 0-7 win over Thomastown after a real dogfight, while the Derry champions pulled off a shock 3-8 to 3-6 victory over Burgess-Duharra in a cracker to keep their club’s remarkable treble bid alive.

And in the intermediate decider, Myshall will continue their remarkable rise and that of Carlow camogie by playing Eglish from Tyrone.

Slaughtneil have already made history by bagging senior provincial titles in camogie, hurling and football and they were full value for this win against quality opposition who fought all the way to the wire but could never get their noses in front.

At the final whistle, the celebrations were heartwarming, as evidenced by the photo above of Josie McMullan and Siobhan McKaigue (Photos: INPHO), though there was devastation in the opposition ranks as their player fell to their hunkers.

Burgess had beaten an Inniscarra team that had accounted for All-Ireland champions Milford to claim Munster honours but they suffered for a lethargic start. In contrast, Slaughtneil flew out of the traps and that gave them just enough breathing space as the Tipperary representatives threw everything at them.

The switch of Louise Dougan from her normal midfield role back to a more defensive position proved a masterstroke as she had a wonderful game and goals from Mary Kelly, Denise McGuigan and Therese Mellon did the damage at the other end of the pitch.

They had a greater spread of scoring too, with seven players in total contributing, while Burgess-Duharra’s tally was compiled by just Eimear McDonnell (2-2) and Jenny Grace (1-4 from frees), although Gemma Grace, Maeve Moloney, Ruth Barry and Caoimhe Maher also stood out.

Sarsfields had to come back from a 0-5 to 0-1 interval deficit to book their berth in Croke Park.

McGrath, who clocked up seven points, opened the scoring after 13 minutes but it was all Thomastown from there to the end, as Niamh Donnelly (two), Anna Farrell (two) and Jenny Reddy found the target to give the Kilkenny crew a merited advantage.

‘Hopper’ McGrath managed to rejuvenate his charges at the interval though and with Maria Cooney and Clara Donohue to the fore and Kate Gallagher enjoying a wonderful tussle with Farrell at midfield, they grinded their way back into the game with three Niamh McGrath frees.

er sister Clodagh levelled before Niamh gave them the lead from 60 metres, but Donnelly levelled with eight minutes remaining and after an exchange of points between the two freetakers, it was 0-7 each entering injury time. 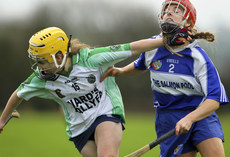 And it was McGrath that settled the tense battle and broke Thomastown’s hearts by nervelessly converting from a 45.

Not too many would have predicted a Carlow-Tyrone pairing in the intermediate final but Eglish made the experience of playing in last year’s penultimate round count as they edged out Gailltír by 1-5 to 1-4.

They were full value for their 0-4 to 0-2 half-time lead, having spurned numerous opportunities in that initial period. Leanne Donnelly was the primary thorn in Gailltír’s side, backed up by Ciara McGready and Brenda Horsfield (pictured above blocking Gailltír's Trish Jackman), while Kate Lynch and Áine Lyng hit the Waterford outfit’s points.

Gailltír got it back level in the second half but Donnelly goaled on the way to finishing with 1-3 and though Trish Jackman responded at the other end, it came too late for them to rescue their hopes.

Myshall won two junior All-Irelands in a row in 2012 and 2013 and will now do battle for an intermediate championship after beating the fancied Cappataggle 1-8 to 0-8. 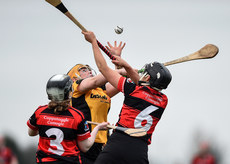 Ciara Quirke (pictured above battling with Cappataggle duo Aisling Raymond and Moira Connaughton) scored three goals as Carlow won the All-Ireland premier junior title last September, 12 months after annexing the junior A crown. She also plundered a hat-trick in the Leinster club final. And she was a key player once more, finishing with 1-5 on this occasion, while fellow Carlow star Marian Doyle was magnificent in a hard-working role around the middle third.

It was 0-4 apiece at the change of ends, with Amy Treacy providing three scores for Cappa and Breege Nolan, Ciara Mullins and Quirke on the mark for Myshall.

Treacy slotted two more frees to push the Galway crew clear but then a Quirke free dipped under the crossbar in the game’s seminal moment six minutes after the resumption. She added three more points as Myshall took over and moved five ahead.

There was late drama though as Michelle Skehill and Laura Creaven reduced the margin to a goal and it needed a brilliant save from Joanne Joyce from Leah Treacy to hold Cappa at bay.